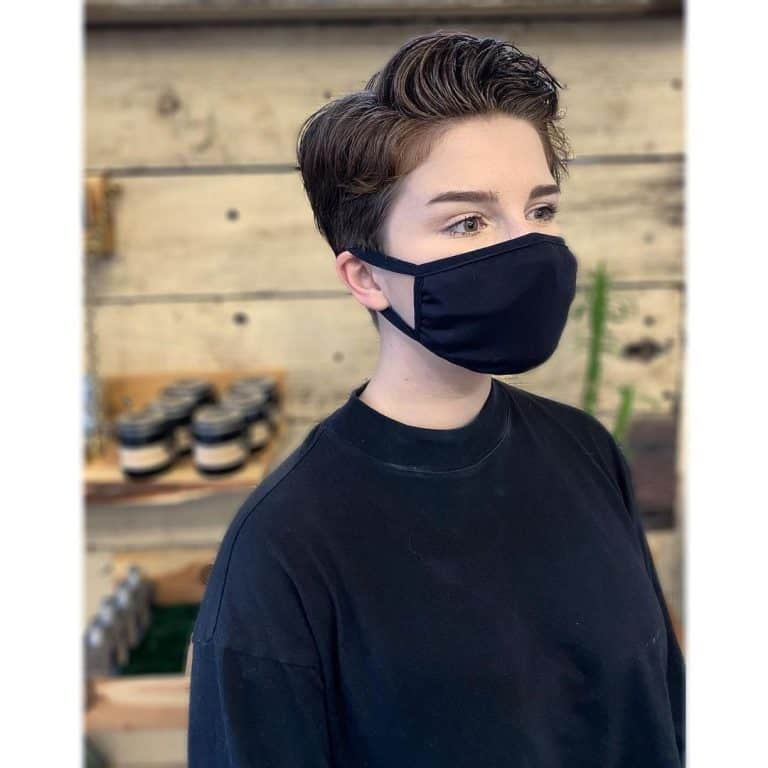 One of the most important ways to express oneself is through their hair. Androgynous haircuts are becoming more popular in recent years, and it’s not difficult to see why. An androgynous haircut is a haircut that can be worn by any gender, no matter what one’s personal expression is. These hairstyles, in which you will see masculine and feminine reflections, are popular choices that we frequently encounter both on screen and many celebrities recently.

What Does Androgynous Mean?

The term “androgynous” derives from the Greek word for “man-woman” or “male-female.” Some people use this term to refer to someone who doesn’t conform strictly to masculine or feminine gender roles. Others may have an androgynous style of dressing, meaning they wear clothes which are considered relatively neutral in terms of gender classification.

The Basics of Androgynous Haircuts

In the past, when people talked about androgynous haircuts, they usually meant a haircut that was two-thirds shaved on one side and long on the other. Today, the meaning of androgynous hair has evolved to include a variety of different hairstyles.

An androgynous haircut is a hair style that does not conform to traditional gender norms or cues. They can range from short, to long, to curly or straight, and everything in between.

There are three important things you should consider when getting an androgynous haircut: The style you want, your current length of your hair, and how much time you have for styling it every day.

Go Bold with Your Androgynous Haircut

As fashion has evolved, so has the idea of what is considered beautiful. Androgynous hairstyles are on the rise, and it’s time to get in on the trend.

People often rely on their hair to look their best when they’re in public. But in the workplace, you might be told to wear your hair in a more professional style – which can be difficult with long locks. Instead of trying to figure out how to work it, try an androgynous haircut! It will give you a new hairstyle that’s perfect for any occasion.

Also, who says that you can’t wear an androgynous haircut if you’re not an androgyne? You can get either short or longer hair, just like what he/she had before. Some people might say that this is the worst hairstyle because they think that they will look more masculine than feminine – but it’s just the opposite. Androgynous haircuts are actually the best way to embrace your feminine side.

Some of these hairstyles may have been previously associated as “unisex hair” because they were worn by both genders in the past, but now they have been given their own category of “androgynous” or “non-binary” hair. Here are 30 daring androgynous haircuts for more stylish options.

Once you’ve found the best angle for your face, there’s no reason not to get this haircut! With the assistance of professional hands, you may show your coolness.

Undercut cut is a highly preferred option with many versions. You may style your hair in any way you like, and you can experiment with different lengths and shapes to achieve different styles.

When it comes to Androgynous Haircuts, Ruby Rose is one of the first names that comes to mind. Her latest hairstyle, which is more aggressive, is striking.

The distinction of this haircut comes from the fact that it necessitates a high level of professionalism. With this cut, you’ll have a memorable style after you find the proper hairstylist.

This haircut is aggressive, attractive, and irresistible. It is revealing all the beauty of your facial characteristics. Yes, making a decision takes a lot of courage, but it’s well worth it! Furthermore, it is without a doubt the most user-friendly haircut in the world.

You can cut the lower part of your hair the way you want and feel, and you can reveal the difference of your style with these undercuts.

With new cutting techniques and coloring, the popular style of the 1980s is back on the agenda. This androgynous haircut is both fascinating and nostalgic.

You can show your bravery through your hair, and your wild and cool appearance will astonish others who see you.

Due to its easy use and practicality, the pixie is always one of the most popular hairstyles. It’s also a sophisticated way to show off your androgynous style.

A long top haircut allows you to style your hair as you choose. Your hair, which you may comb anyway you like, shows that even with short hair, you have a lot of options.

You can attract attention to your cool and powerful style by using graduated haircuts to highlight your masculine side.

This look, which takes another level in the exclusivity of the Mullet haircut, is like a magnet for attracting attention!

Shaved lines on the basic pixie cut can offer a fresh ambiance with modern additions.

While the Mohawk is a two-sided cut with a lengthy top, we can refer to this hairstyle with long bangs as the modern version of the Mohawk.

With its voluminous appearance, it will steal the hearts of people who view this pixie, as well as your heart with its ease of usage.

Rebel, bold, remarkable. With this punk style, you will be living proof that rock and roll is not dead!

If you’re thinking about Androgynous Haircuts, this classic style should be at the top of your list.

You will make great first impressions with your strong and courageous look. You can customize this style to your desired cut and experiment with different patterns.

Wouldn’t it be nice to give the basic pixie cut a bit more personality? With this silver color and voluminous cut, you will certainly be incredibly cool.

With its unique cut and color, we admired this haircut. The style, which has been made even more interesting by the use of different shades, is undoubtedly one of our favorites, in addition to catching attention with its modern touches.

Do you want to see the mullet cut in a more edgy way? This amazing and daring style will bring out your brave side.

This haircut, which has been preferred by Ellen DeGeneres for years and identified with her, is one of the examples that reflects the Androgynous haircut very well. The bangs left a little longer will allow you to shape them according to your mood.

If you’re hesitant to cut your hair short because it’s curly, we have a great example for you. Don’t be afraid to have a genderless haircut if you’re tired of dealing with long curly hair. This free- spirited and fashionable appearance is ideal for you.

One of the best examples of the undercut style is this one, which looks great on straight hair. Allow your hair to swept back and express your free style.

When combined with red tones, this hairstyle, which is inspired by the Mohawk style, looks even more free-spirited and reckless. This hairstyle will look great on anyone, no matter how thick or thin their hair is.

Asymmetrical Cut With One Side Shaved

This cut, which has an even cuter look with tiny curls, is assertive, easy to use and attractive. What more could one want from a haircut?

Halsey has recently revealed her very assertive style with preferred short hair. We like this haircut very well for Halsey, who has tried almost all kinds of short hair. This haircut, which reveals the shape of your face, will suit your stylish look.

With the fresh and attractive cut, your time to leave the house will decrease to five minutes and your quality of life will increase considerably.

This haircut, which is particularly popular in Korean fashion, is quite popular among Korean women and men. One of the best examples of Androgynous cuts is this beautiful cut that completes straight hair.

This partially messy cut is completed when the front of your hair is combed so that the hair falls on your forehead. This cut, which will be used by those with a wide forehead, looks very stylish.

A lot of people have embraced the idea of an androgynous haircut recently because they want to explore more of their femininity or masculinity without having to fully commit to one side or the other. We are living in a time where gender roles are being more fluid. The fashion world is no exception to this rule.

Our team of expert hair writers, bloggers, and stylists are passionate about helping women find the best haircuts, hairstyles, and hair colors. Whether you’re looking for a new cut or just some inspiration, our team at HairstyleAndMakeup.com is here to help! With years of experience in the beauty industry, we know everything there is to know about finding the perfect hairstyle for every occasion. So browse our site for the latest trends, the best products, and all the inspiration you need to find your perfect hairstyle!
More from this author